With the advance of science and technology, more demands are being placed upon stability, performance, and the intelligence of electronic products. Product design engineers face many problems with the verification and debugging of high-speed signals. A typical example is intermittent glitches with some low duty cycle signals, such as laser pulses, metastable low-duty radar pulses or other signals. To analyze these signals, it requires more oscilloscope performance: not only higher sampling rates and deeper memory depth, but also a higher waveform capture rate.

Challenges to the traditional testing methods

Here is an example to illustrate. As shown in Figure 1, the pulse signal appears between an equal interval, the time of interval is 50ms.

We are using a SIGLENT SDG2000X series Function/Arbitrary Waveform Generator to reproduce a similar signal that takes a pulse signal with 5 equal-intervals as an example. See figure 2: 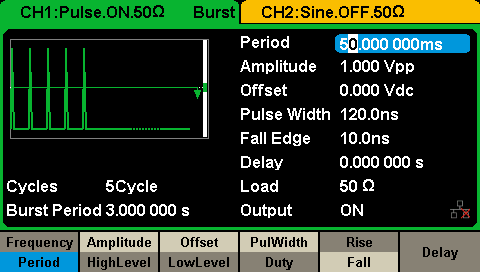 This is a pulse signal with an equal interval time of 50 ms whose rise time is set to 10 ns, pulse width is 120 ns. If we only need to observe one pulse of the signal, we usually use the “auto setup” key to capture the pulse with a high sampling rate. Along with the measurement function, you can acquire more waveform details. Next, we can use a SIGLENT SDS1000X series oscilloscope to capture the waveform, as shown in figure 3: 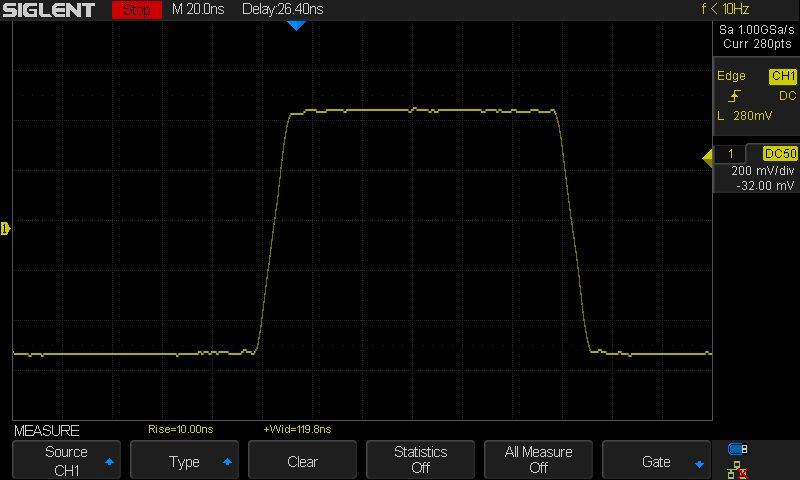 However, if you want to capture and observe a number of successive pulses, the conventional approach is to increase the sampling time. But it will inevitably reduce the sampling rate due to the limited memory depth. Low sample rates cannot achieve an accurate representation of the waveform. 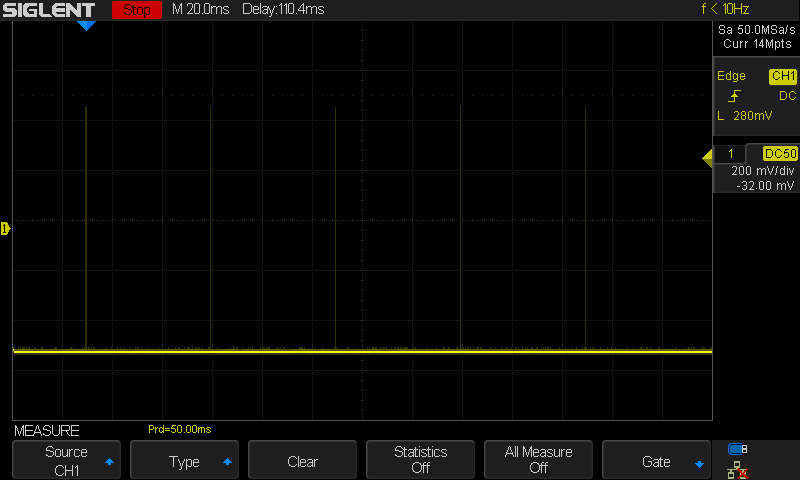 We set the memory depth up to 14 Mpts. In order to acquire all five pulsex, the time base is set to 20 ms/div. Compared to FIG. 3, the time base is expanded 1,000 times. It can be seen from Figure 4, the current sampling rate is only 50 MSa/s, thus we can know the sample interval is only 1 / 50M = 20 ns. Therefore, we can only acquire less than two points during the signal rising edge, or even none of the points can be acquired. So it makes no sense for us to analyze the characteristic of the signal parameters (rise time, pulse width, duty cycle, etc.).

Of course, in theory, users can expand the memory depth to increase the sample duration while the sample rate remains fixed. However, this approach has its limitations:

1. High-speed acquisition memory (memory depth) is an expensive resource, and it is difficult to quantitatively determine how much storage capacity is needed in the end.

2. The deeper memory depth will make the acquiring and processing time become longer. It inevitably means that the interval between two acquisitions becomes longer too. Thus, the sampling rate will drop because of the increased dead time.

The example above is a signal analysis based on five 50 ms interval pulse signals. In practice, the number of equal-interval pulse signals we need to analyze may be far more than five. In addition, it’s useless for us to analyze the rotor and laser pulse signal by conventional measurement methods without advanced analysis tools because of the potentially long intervals between two abnormal waveforms of several hours to even tens of hours.

The history and sequence mode of the X-Series Oscilloscope

Sequence mode
To solve this problem, Siglent has an innovative solution called the “segmented acquisition mode” which divides the memory unit into several sequences. Each sequence stores the current triggered waveform. Once triggered, it will be saved in the segment (see figure 5).

The benefits of this acquisition mode allow engineers to select the fragment they are interested in regardless of the redundant part, and it also improves the utilization rate of valuable storage depth. Furthermore, as the amount of processing data gets smaller, processing speed gets faster, equivalent waveform capture rate gets higher, and dead time drops off significantly. In the sequence mode, the minimum dead time of the SDS1000X Series can drop to 2.5us, and the SDS2000X series can drop as low as 2 μs.

The history mode is a background permanent history waveform recording mode that can be started with one key. A maximum of 80,000 frames can be recorded. The history waveforms can be taken out from the buffer at any time and can be analyzed frame by frame coordinated with the waveform navigation function. It provides the chronology of each frame, displayed in a list, so that we can calculate the interval time between adjacent frames, and the subtle changes in the signal.

Examples of sequence and history mode

Capturing fast-changing signals can make up for insufficient real-time waveform capture rates.
With the rapid development of electronic technology, the waveform capture rate of digital oscilloscopes has been steadily improving. But we should understand that all the maximum waveform capture rates attained by manufacturers cannot satisfy certain circumstances such as: opening interpolation, mathematical operation, measurement and so on. Even more, the time base setting must be adjusted to a slower sweep speed, because the real-time waveform capture rate will be lower with a higher sweep speed. In an era of commercial hype, we should beware of false publicity by manufacturers and verify their claims by using the principle “practice is the sole criteria for testing truth.” We must also choose a suitable measuring method under different conditions to find the best oscilloscope for our application.

Next, here’s an example of a Siglent SDS1000X series oscilloscope:

As shown in figure 6, we will use the SDG2000X to simulate a five successive equal interval of 4 us pulse signal, with its rising of 10 ns, pulse width of 80 ns, trigger source is set to manual: 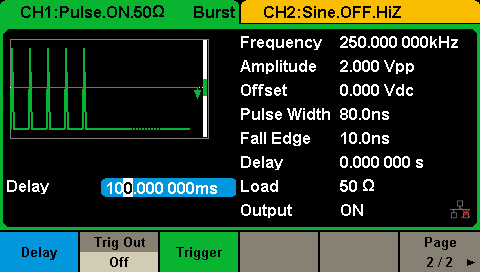 In theory, to capture all of the five pulses , the waveform capture rate should be at least 250,000 wfms/s. Combined with measurement function, the result is shown below with its rise time (Rise) and pulse width (+Wid) displayed on the screen: 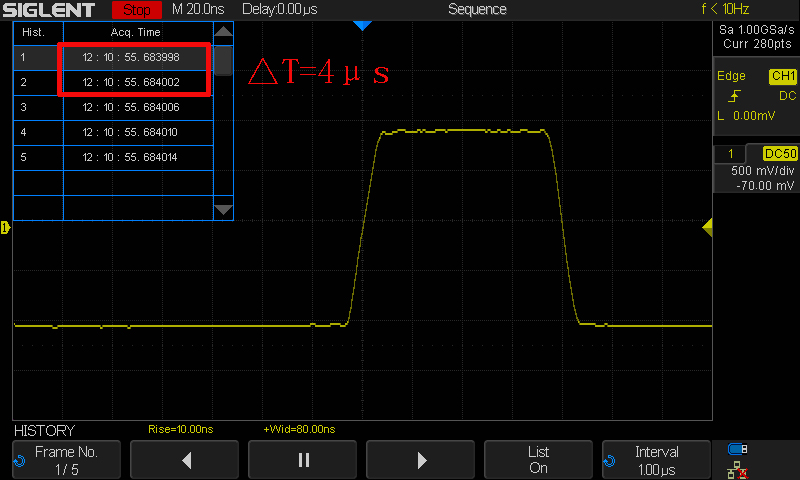 Figure 7: Acquisition of all of the five pulse in sequence mode

We tried to capture all of the five pulses at one time in real-time mode, but unfortunately, only one pulse can be acquired on the screen shown in figure 8: 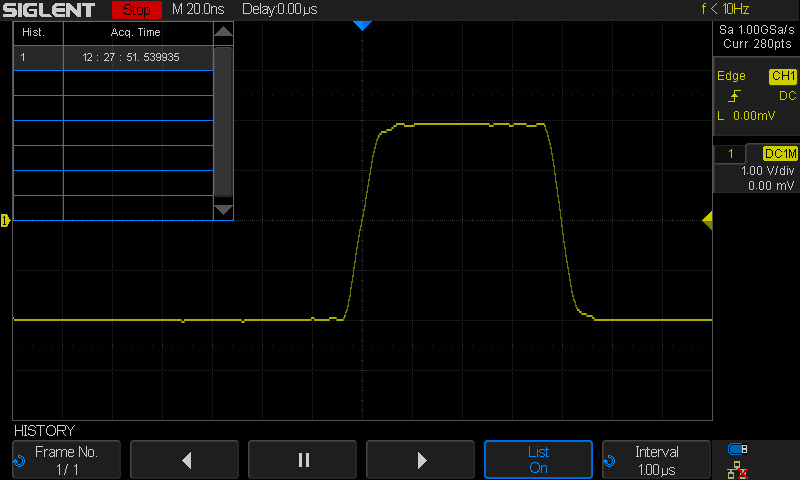 Figure 8: Only one pulse can be acquired under real-time mode

For acquisition and analysis of fast signals, sequence mode can make up for insufficient real-time waveform capture rate and is a great solution for people to explore.

As mentioned in Challenges to the traditional testing methods, Sequence mode can effectively solve such problems. For example, with a 60 s interval signal, the acquired waveform as shown in figure 9: 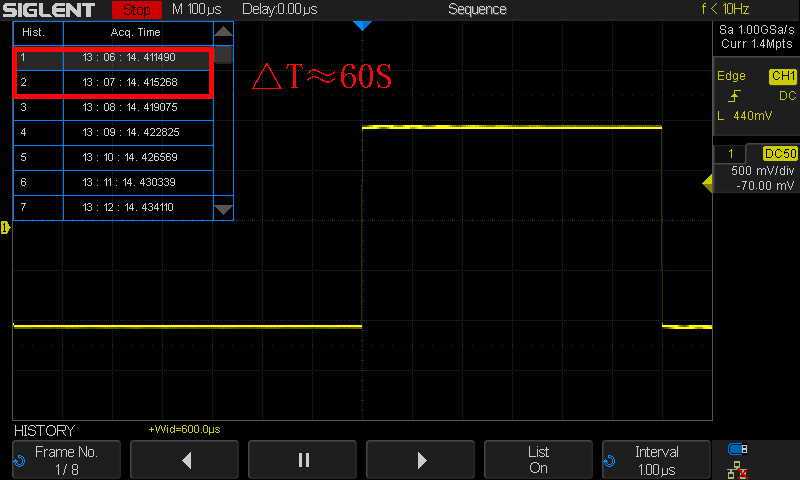 In order to satisfy users’ demands for high performance, highly scalable electronic products, the design of modern electronic products becomes increasingly complex and so does the debugging system. It becomes more and more important to be able to search for abnormal events and separate them from normal events.

As shown in figure 10, here is a PWM signal displayed on the screen of SDS1000X. By using the color temperature display, we can find that there is some noise in the PWM signal. How can we know the duration time and regularity of the abnormal signal? This is the case we will analyze next. 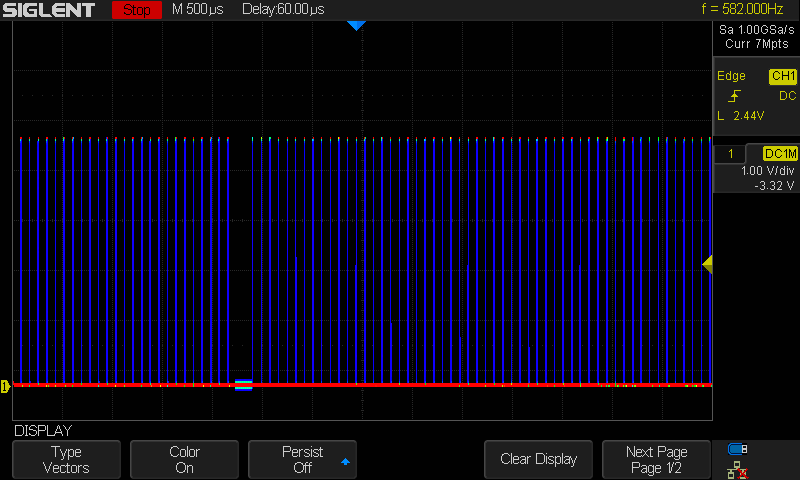 Figure 10: a PWM signal with random noise generated by a device

First，we will use a negative pulse trigger to isolate the event of interest. Then we can capture a certain number of signal segments for analysis of samples using sequence mode. There are 100 abnormal frames captured by sequence mode as we see in figure 11. Combined with a dedicated navigation bar to analyze history waveforms frame by frame, we can use the triggered time and interval time between two adjacent frames to helps us locate and analyze the event we are interested in. 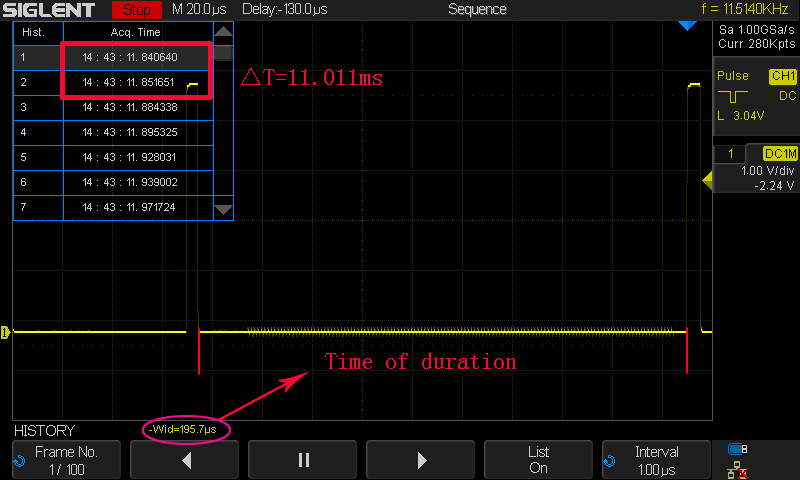 The sequence mode and history mode are closely related. We can easily find sporadic, intermittent glitches or low duty cycle signals, such as laser pulses and metastable low-duty radar pulses. These two modes enable engineers to capture signals with a high sampling rate and at the same time not lose signal details, and thus improve the testing accuracy and the utilization of memory depth.

Combined with a dedicated navigation bar and history waveform list to analyze the waveform details, the X-series oscilloscope provides comprehensive solutions for the problems discussed above.