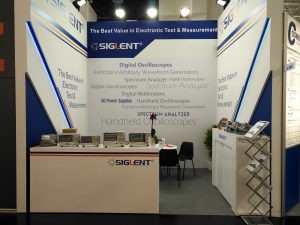 The world’s first economical waveform generator capable of producing square waves to 60 MHz was shown. The SDG1000X has the advantage of being able to generate square waves up to 60MHz. It also includes EasyPulse technology which provides the capability of generating low-jitter pulse waveforms across a very wide range of frequencies, pulse widths, and transition times.

Customers also had the opportunity to check out the popular SDG2000X function / arbitrary waveform generator. With frequencies up to 120 MHz, sampling rate of 1.2 GSa/s, and 16 bit vertical resolution, the SDG2000X also includes a touch-screen display and innovative EasyPulse and TrueArb technologies. TrueArb ensures that every waveform data point of an arbitrary waveform in the memory can be outputted point-by-point without missing or repeating any point. Low-jitter outputs of arbitrary waveforms between 8 and 8M points using variable sampling rates of 1 uSa/s to 75 MSa/s can be achieved. 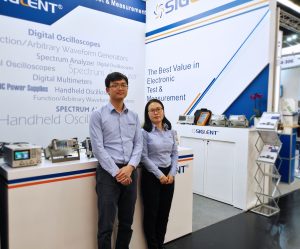 TheEmbedded World 2017 conference is a very popular exhibition for us.We firmly believe that SIGLENT is the best value in electronic and measurement instrumentation. We wish to thank everyone who came by our booth and we look forward to seeing you again next year!